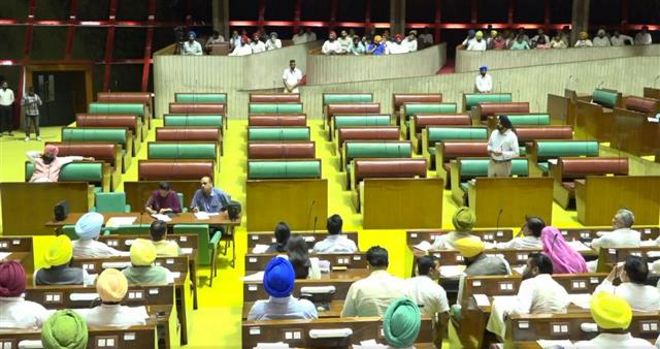 As expected, the AAP government led by CM Bhagwant Mann today won the trust vote on the concluding day of the Punjab Vidhan Sabha session. Speaker Kultar Singh Sandhwan announced that 93 MLAs had voted in favour of the confidence motion. AAP has 92 members in the House.

The Congress and the BJP abstained. The Speaker (an AAP MLA) did not vote. He said Akali MLA Manpreet Singh Ayali and BSP’s Dr Nachhatar Pal had voted for the motion. While the former denied it, the latter could not be reached despite several attempts. Later in the day, Punjab BSP chief Jasveer Singh Garhi, in a statement, denied their MLA had voted for the motion.

Initiating a discussion on ‘Operation Lotus,’ Jalandhar MLA Sheetal Angural claimed two lawyers had offered him Rs 25 crore on behalf of two senior BJP leaders (names expunged by Speaker) and that the Vigilance Bureau had recorded his statement. Ropar MLA Dinesh Kumar Chadha alleged the Congress was “selling” its MLAs to the BJP.

Opposing the motion, Ayali said: “I don’t think there was any need for it. You have 92 MLAs and no one had challenged you. If the BJP tried to lure AAP MLAs with money, as is being alleged, details should be made public. More than 20 days after such allegations by the Finance Minister, no names have been given.”