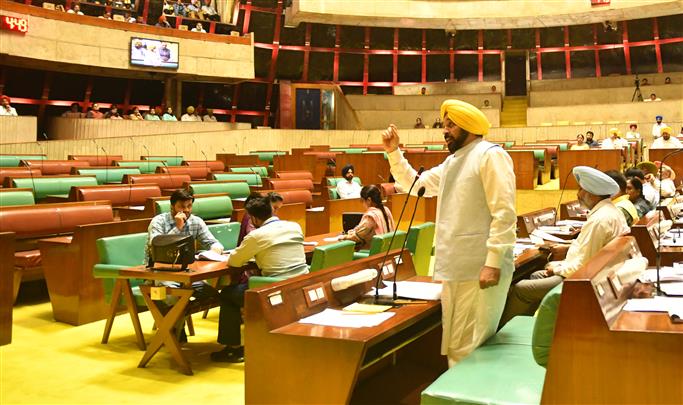 In a surprise departure from its earlier aggressive posturing, the Congress’ protest on the floor of the House was rather low-key on the concluding day of the Vidhan Sabha session. Of the total 18 Congress MLAs, only 13 legislators were present in the House today, before they staged a walkout.

There appeared some confusion among the Congress MLAs over beginning of the Zero Hour, as the Speaker allowed Leader of Opposition Partap Singh Bajwa to briefly speak on the law and order situation before suddenly resuming the debate on the confidence motion.

Realising the move by the Speaker, Amrinder Singh Raja Warring, Sukhjinder Randhawa and Sukhpal Khaira rushed to the Well of the House before others joined the protest.

Amid repeated demands by Bajwa and other Congress legislators to allow the Zero Hour, the Speaker asked AAP MLA Sheetal Angural to speak on the confidence motion.

Congress MLAs claimed they desisted from aggressive posturing and raising slogans, as the Speaker’s mother was present in the Governor’s gallery.

Speaking outside the House, Bajwa alleged that the Speaker did not allow the Congress to participate in the confidence motion in light of “Operation Lotus”

“We came prepared to question the AAP on its ‘Op Lotus’ theory. The AAP had to conclude the debate after making AAP MLA Sheetal Angural record his statement before the Vigilance Bureau. Now, the AAP MLA has named BJP leaders for engineering defection in lieu of monetary consideration, let us see what action they take against them,” Bajwa said.

Chandigarh-born Harmeet Dhillon loses elected as RNC chairperson in US

3 dead in New Zealand due to rain

Spread the NewsPunjab News: There has been a political uproar over Dera Sacha Sauda chief Gurmeet Ram Rahim’s satsang to

Spread the NewsPunjabenews: Sushil Kalia, a former Congress councillor from ward number 64, who is facing allegations of fraud, committed