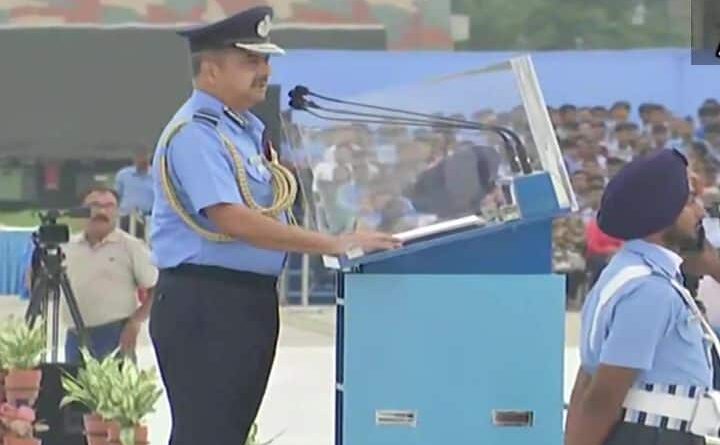 The Indian Air Force Saturday began celebrations to mark its 90 years of foundation at the Sukhna Lake complex in Chandigarh. It is for the first time that the function is being held outside Delhi-NCR. The celebration was graced by IAF chief Air Chief Marshal Vivek Ram Chaudhari.

Speaking at the occasion, the Air Chief Marshal said that the Indian Air Force has, “inherited the proud legacy curated by sheer hard work, perseverance & vision of our predecessors. Right to acknowledge the contribution of our veterans who chartered this course. Now the onus is on us to usher IAF into the centenary decade, as reported by ANI.

He also announced the creation of a weapon system branch for the officers in the Indian Air Force that will help reduce expenditure on flying training.

“On this historic occasion, it’s my privilege to announce that Govt has approved the creation of a weapon system branch for the officers in the Indian Air Force, said the Air Chief Marshal.

“Creation of this branch would result in savings of over Rs 3,400 cr due to the reduced expenditure on flying training,” he added.

He also spoke about recruiting 3,000 ‘Agniveer Vayu’ for initial training in December and inducting women Agniveers into the air force from next year.

“In Dec this yr, we’d be inducting 3,000 Agniveer Vayu for initial training. This number will go up in the years to come,” said  Air Chief Marshal Chaudhari, according to ANI.

“We are also planning on induction of women Agniveers starting next year. Creation of infrastructure is in progress,” he further said.

The IAF will conduct an hour-long air show at the lake with nearly 80 military aircraft and helicopters taking part in the celebrations. The recently inducted indigenously-built Light Combat Helicopter (LCH) “Prachand” will also showcase its aerial prowess during the fly-past.