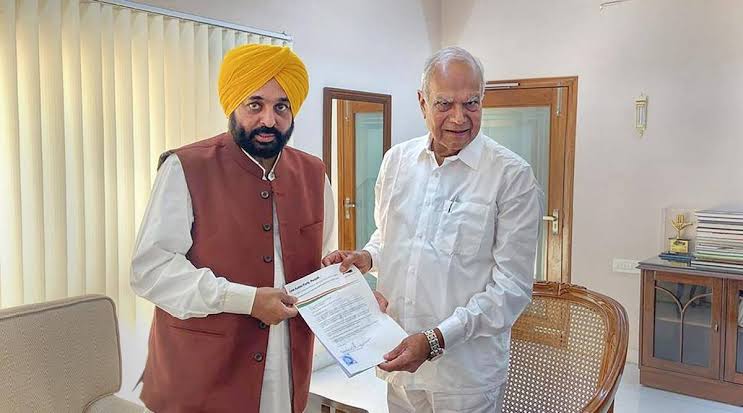 Chandigarh: Punjab Chief Minister Bhagwant Mann has shot a letter to the state Governor and Administrator of Chandigarh Banwari Lal Purohit to express resentment over the removal of Punjab cadre IPS officer from post of Senior Superintendent of Police (SSP), Chandigarh.

In the letter written, the Chief Minister has apprised the Governor that post of Senior Superintendent of Police, Union Territory, Chandigarh has traditionally been occupied by a Punjab Cadre IPS Officer. Likewise, he said that an IAS officer of Haryana Cadre had been appointed as the Deputy Commissioner of the UT. However, Bhagwant Mann said that he was surprised to learn that 2009 batch IPS officer of Punjab cadre Kuldeep Singh Chahal has been repatriated to Punjab prematurely.

The Chief Minister further said that much to the dismay of the state, the charge of SSP, Chandigarh has been given to a Haryana Cadre IPS Officer. He said that this move was unwanted and undesirable as this is going to disturb the balance among the states in running the affairs of UT, Chandigarh. Bhagwant Mann further said that if due to some reason SSP Kuldeep Singh Chahal was to be repatriated, then a panel of suitable IPS officers should have been sought from Punjab well in advance.

Seeking the kind intervention of the Governor in the matter, the Chief Minister said that the state government will shortly be sending a panel of three IPS Officers of Punjab cadre for the post of SSP, Chandigarh. He expressed hope that soon an IPS Officer of Punjab Cadre will be appointed as SSP, Chandigarh.