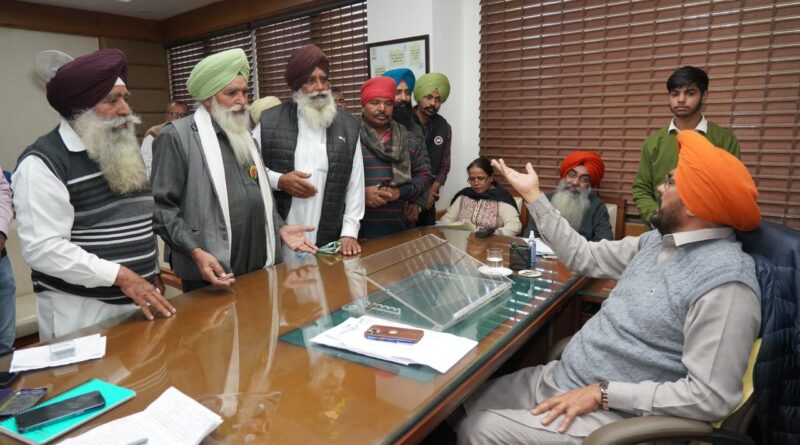 Chandigarh: The Punjab Government led by Chief Minister Bhagwant Mann will initiate second phase of drive against illegal possession from panchayati lands to get these lands free.

Disclosing this here today Rural Development & Panchayats and Agriculture Minister Kuldeep Singh Dhaliwal said that the State Government had got more than 10,000 acres of land in its first phase and now the second phase would be started shortly.

While addressing at weekly program ‘Janta Darbar’ in Vikas Bhawan here, the Minister said that the illegal possessions from panchayati lands would be removed at all cost and directions had already been issued in this regard. He also instructed the official of Rural Development & Panchayats, Agriculture and NRI Affairs departments to ensure that the complaints of people should be resolved promptly. Speaking about the nature of the complaints, the Minister pointed out that mostly complaints were related with the Panchayati lands and on the spot proceedings were being initiated to address these without any delay.

The Minister also asked the officials and people of the state to join hands with the State Government in wiping out the menace of corruption. He said that none would be spared in case found involved in the corrupt practices.

Urging people to use facebook for registering complaints, if any, the Minister said that he was holding weekly Janta Darbar program at Vikas Bhawan on every Tuesday to hear the plaints of people besides in Ajnala on every Saturday. He said that if anyone unable to visit these spots, he/she could use facebook to lodge their complaint. He also reiterated that the Punjab Government was committed to resolve issues pertaining to NRIs in a prompt and satisfactory manner.

The State Government is all set to organize ‘NRI Punjabian Naal Milni’ programs at five locations including Jalandhar, SAS Nagar, Ludhiana, Moga and Amritsar respectively on December 16, 19, 23, 26 and 30, where issues of NRIs would be heard by the competent authorities to get them resolves without any delay.