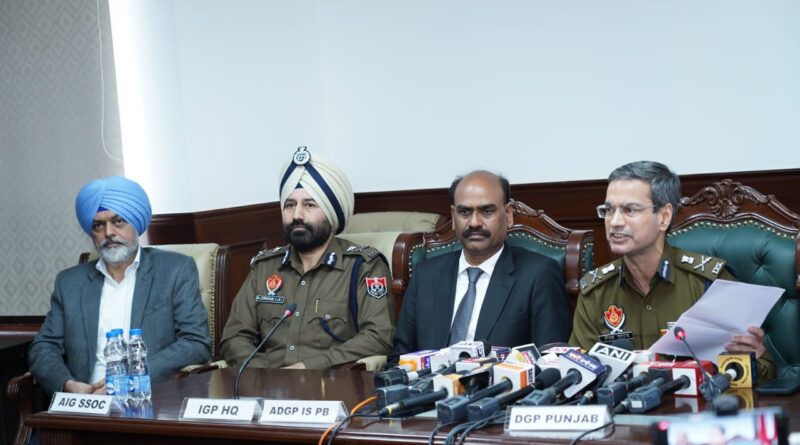 Chandigarh: As part of the ongoing drive against anti-social elements launched on the directions of Chief Minister (CM) Bhagwant Mann, Punjab Police has solved the Tarn Taran Rocket Propelled Grenade (RPG) attack case in less than a week with the busting of a foreign-controlled terrorist module leading to arrest of six persons, including the two juveniles in conflict with law, who carried out the terror attack at Police Station Sarhali building in Tarn Taran at about 11.18pm on December 9. 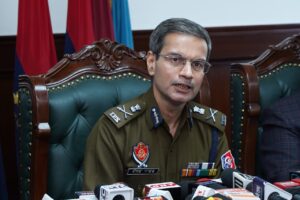 Apart from the arrest of two juveniles in conflict with law, the remaining four module members arrested have been identified as Gurpreet Singh alias Gopi Numberdar (18) of Naushera Pannua; Gurlal Singh alias Gahla (19) of Chohla Sahib; Surlalpal Singh alias Gurlal alias Lali (21) of village Thathiya Mahanta; and Jobanpreet Singh alias Joban (18) of Naushra Pannua. Pertinently, Gopi Numberdar, who was on bail as he was arrested as a juvenile, turned 18-years-old a day after his release on November 22, 2022, and immediately got in touch with the foreign-based handlers. The foreign-based handlers used cut-outs and Dead Letter Box (DLB) techniques for retrieval of consignment and establishing contact so that the module members were assigned tasks directly by the handlers and were aware of only their roles. Even the identities of sub-modules remained hidden from other sub-modules.

The Police teams have also recovered three pistols— two .32 bore and one .30 bore along with ammunition, one hand grenade P-86 and one motorcycle used in crime from the possession of the arrested persons.

DGP Gaurav Yadav said that the Taran Taran Police, in coordination with the Counter Intelligence Wing of Punjab Police have conducted meticulous investigations based on technical and intelligence inputs. The investigations on ground were led by SSP Tarn Taran Gurmeet Chauhan and his team and revealed that the attack was the handiwork of Gopi Numberdar and Gurlal Gahla, who were directly in touch with Landa Harike and Satta Naushehra. Both Gopi Numberdar and Gurlal Gahla were apprehended from Patti Morh Sarhali on Thursday and one .32 pistol along with 15 live cartridges was recovered from their possession. The Police teams have also recovered a hand grenade on the disclosure of Gopi Numberdar, he said.

As per the investigations, initially Gopi had received funding of Rs 8.5 lakhs and one .30 bore pistol along with a chunk of 200 live cartridges from Landa and Satta, said the DGP, while adding that on December 1, 2022, Gopi along with Gurlal Gahla and Jobanpreet Joban retrieved another consignment containing RPG from village Jhander in Tarn Taran and dumped it at a spot near village Marhana in Tarn Taran.

DGP Yadav said that during questioning, Gopi Numberdar and Gurlal Gahla revealed that the two juveniles in conflict with law were tasked by the Landa and Satta to execute the attack on Police Station Sarhali, which was aimed at creating terror in the border state. Both accused persons further revealed that another accused Gurlal Lali had provided logistic support and also handed over Rs 1 lakh to both the juveniles, who were camping at village Marhana a couple of hours prior to the attack at the Police Station building.

The Police have arrested Jobanpreet Joban and Gurlal Lali from near Naushehra Pannuan and recovered one .30 bore pistol along with 35 live cartridges and a motorcycle used in the crime from his possession.

DGP Gaurav Yadav said that during interrogation, accused Joban corroborated the disclosure of Gopi regarding retrieval of RPG and also disclosed that on the instructions of Landa and Satta, he had picked one juvenile in conflict with law from village Shahbajpur and dropped him at village Marhana on instructions of Gurdev alias Jaisel.

“Connecting the dots, Police teams have successfully apprehended both the juvenile attackers from Tubewell at Chamba village and recovered one .32 bore pistol alongwith 15 live cartridges from their possession,” he said, adding that after the attack, they both fled to village Saido and took shelter in a tubewell room already arranged by Landa. Both shooters had learnt to operate the RPG from YouTube videos and were given instructions by Landa in a video call as well, he said.

A case FIR No. 187 dated 09.12.2022 stands registered under section 307 of the Indian Penal Code (IPC), section 16 of the Unlawful Activities (Prevention) Act (UAPA) and section 3 of the Explosive Substances Act at Police Station Sarhali. Backward and forward linkages are being probed, and investigation will be taken to the logical conclusion by arrest of remaining members of the terrorist module and evidence brought on record.