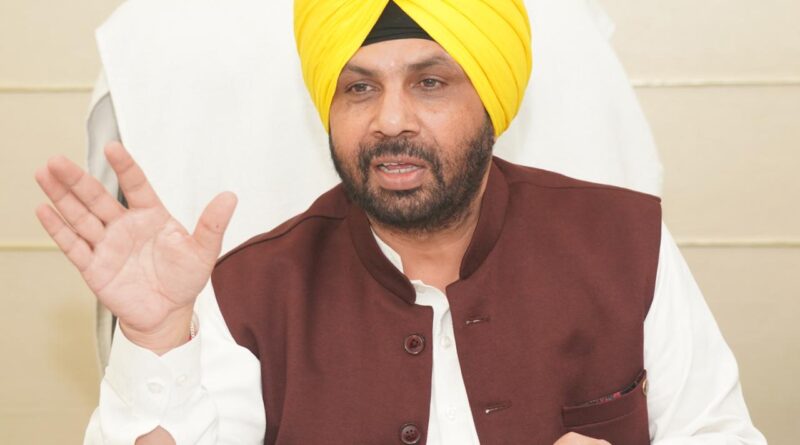 Chandigarh: Adopting a zero tolerance policy against corruption and irregularities under the leadership of Chief Minister Bhagwant Mann, the Public Works Minister Harbhajan Singh ETO has suspended two assistant engineers from government service with immediate effect for carrying out substandard quality work by ignoring the standards in the repair of roads.

The suspension has been imposed under Rule 4 of the Punjab Civil Services (Punishment and Appeal) Rules, 1970.
Disclosing this here today, the Cabinet Minister said that assistant engineers of PWD Mahesh Kumar Sharma and Rajesh Kauda had carried out the work of substandard quality by ignoring the standards laid down in the work of link road from Tiur to Jakar Majra during special repair of the roads.

He said that the Punjab Government under the leadership of Chief Minister Bhagwant Mann is committed to provide a corruption-free, transparent administration to the people of Punjab and stern action would be taken against the officers and employees indulging in corrupt practices and dereliction of duty.

He said that apart from these, two employees Sogandh Singh Bhullar, Executive Engineer, Construction Division No. 1, PWD and Dilpreet Singh, Sub Divisional Engineer Construction Sub-Division No. 2, PWD have been directed to send their clarification within four days.

Meanwhile, during the period of suspension, the headquarters of these employees will be at the office of chief engineer Patiala.