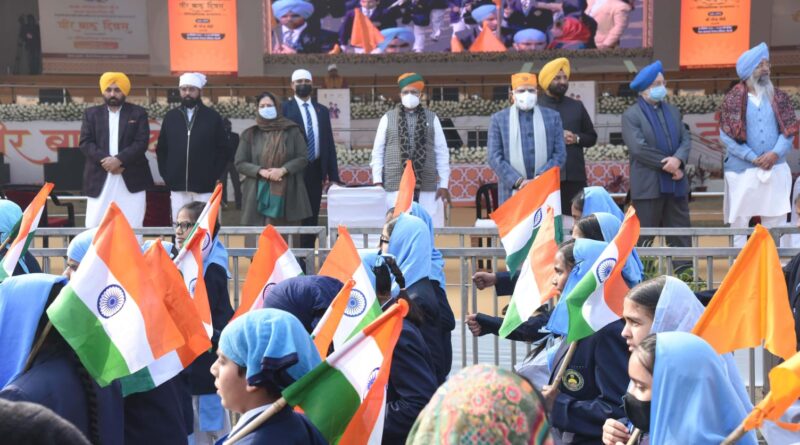 New Delhi: Punjab Chief Minister Bhagwant Mann on Monday said that the unprecedented and supreme sacrifice made by chotte sahibzadas will ever inspire humanity to fight against tyranny, oppression and injustice. 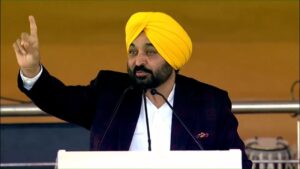 Addressing the gathering here during a function organised here at Major Dhyan Chand Stadium, the Chief Minister said that Baba Zorawar Singh and Baba Fateh Singh, the chotta Sahibazadas of tenth master of Sikhs Sri Guru Gobind Singh, attained martyrdom at a tender age adding that they showed exemplary courage and fearlessness to stand up against the might of the Mughal Governor of Sirhind. He said that the sahibzadas had inherited the traits of valor and selfless service from Dashmesh Pitaah, who fought relentlessly for the sake of humanity. Bhagwant Mann said that today the entire world is paying glowing tributes to Chotte Sahibzadas for their unparalleled sacrifice in the history of the world.

Eulogizing the supreme sacrifice of younger Sahibzadas and Mata Gujri ji, the Chief Minister said that these sacrifices were unprecedented in the annals of the history of mankind across the globe. He said the entire world was proud of this unique and unparalleled sacrifice which was a matter of great honor not only for the Punjabis or our countrymen but everyone living across the globe. Bhagwant Mann said the history of Punjab was replete with countless sacrifices that had derived inspiration from our great Gurus like Sri Guru Arjun Dev ji, Sri Guru Teg Bahadur ji and Sri Guru Gobind Singh ji who laid down their lives for the sake of mankind.

The Chief Minister said that on one hand people were heading towards Fatehgarh Sahib for paying obeisance to younger sahibzadas and on the other hand Punjabis are observing this month as ‘month of mourning’. Bhagwant Mann recalled that his grandparents also used to sleep on the ground during these days to mourn the martyrdom of chotta sahibzadas and Mata Gujri ji. He said that the younger generations need to be made aware of this supreme sacrifice to inspire them to make selfless sacrifices for the country.

Expressing gratitude to the Prime Minister Narendra Modi for organizing this event, the Chief Minister said that it will go a long way in perpetuating the glorious legacy of chotte sahibzadas to our younger generations. He said that commemorating the great sacrifices of the chotta Sahibzadas is the need of the hour to cement the ethos of human rights. Bhagwant Mann said that this will also help in keeping the youngsters abreast about the great sacrifice of chotta sahibzadas.

Bhagwant Mann also thanked the Prime Minister for holding two sessions of the prestigious G-20 summit on Education and on Labour, in the holy city of Amritsar. He said that the state is renowned all over the world for its warm hospitality and no stone will be left unturned for welcoming the guests from participating nations during these events. Bhagwant Mann said that these sessions will be held at the sacred land of Amritsar where lakhs of devotees daily pay obeisance at Sri Darbar Sahib, Durgiana Mandir, Sri Ram Tirath, Jallianwala Bagh and others.