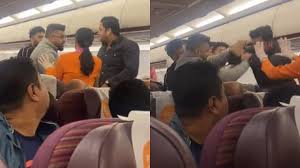 National
December 29, 2022 punjabenews Passengers get into physical altercation on Bangkok-Kolkata flight, Thai Smile Airways flight from Bangkok to Kolkata, video of the scuffle inside the plane had gone viral on social media

New Delhi: A scuffle broke out between some passengers on board a Thai Smile Airways flight from Bangkok to Kolkata. On Wednesday, a video of the scuffle inside the plane had gone viral on social media. In this, some co-passengers are seen slapping a person several times.

In this, some co-passengers are seen slapping a person several times. According to a passenger on board, the incident took place on December 26 when the plane was about to land from the runway. The people pacified the rioters. The cause of the dispute is yet to be ascertained.