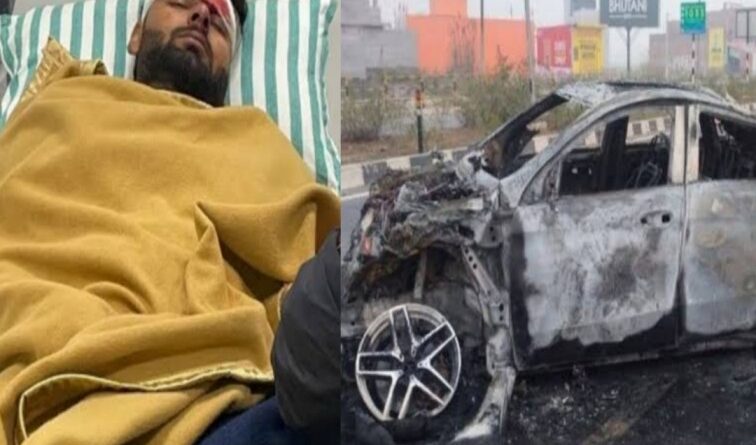 Roorkee: After the accident of Rishabh Pant, the wicketkeeper and batsman of the Indian cricket team, pictures are constantly being shared on social media, but in the meantime, CCTV footage of Rishabh Pant’s car accident has surfaced, in which Pant’s car can be seen at what speed Pant’s car collided with the railing.

While returning home, Rishabh Pant’s car collided with the railing and the whole incident was caught on CCTV.
After this, the car caught fire but the news of relief is that Rishabh Pant is fine at the moment. Meanwhile, Uttarakhand DGP said that cricketer Rishabh Pant was injured in a road accident and his car collided with a divider in Roorkee. His car then caught fire and Pant broke the wind screen and came out. He was alone in the car at the time of the accident.
The DGP further said that there was not much injury on the body but there is a possibility of a fracture in one leg. He was admitted to Max Hospital in Dehradun. Indian cricketer Rishabh Pant’s car met with an accident near Mohammadpur Jat under Kotwali Mangalore area around 5.30 am.
According to the statement of the injured Rishabh Pant, he lost balance on wheels and car collided with the divider after his balance deteriorated.
The fire had engulfed the car badly. 108 who were present at the spot and haridwar police first rushed the injured Pant to Roorkee hospital, after which he was sent to Dehradun.
Meanwhile, Rishabh Pant himself tried to get out by opening the door of the car but could not get out due to injuries. He also had a bag. At the same time, some youths who reached the accident spot did not help Rishabh and took out money from his bag and fled from there. He was the one who informed the police and an ambulance reached the spot.