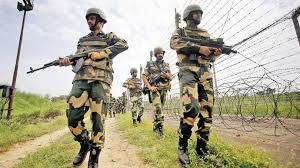 Amritsar: The Border Security Force (BSF) has killed a Pakistani intruder on the Indo-Pak border in Amritsar, Punjab on Tuesday morning.

The intruder also had an imported gun. This is the first infiltration attempt of this year that BSF has succeeded in thwarting it.
At present, the BSF has taken possession of the body and started further investigation.
BSF personnel of 73 battalion were on patrol on the border near Pak border in Amritsar. During this time, they anticipated someone’s arrival amidst dense fog.
The intruder had reached the security fencing built 500 meters inside the Indian border. When the BSF personnel raised their voice, the intruder tried to hide. After which the soldiers had to open fire.
BSF personnel have also recovered a pump gun from the slain intruder.