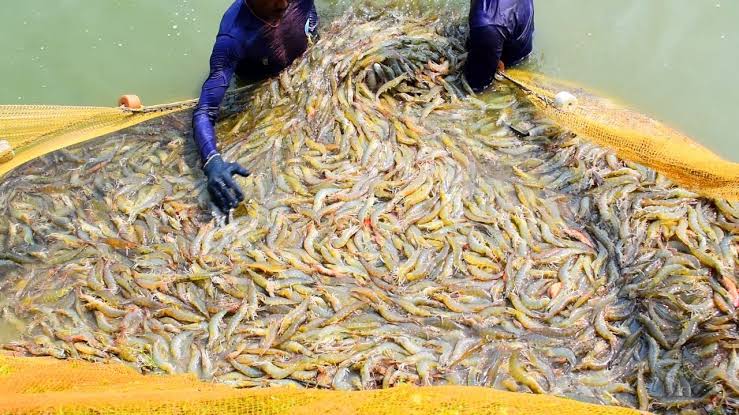 Punjab E News: Chief Minister Bhagwant Mann-led government has conceptualized a strategy to increase area under profitable agri-allied occupation – shrimp culture to 5,000 acres over next five years with an aim to further promote pisciculture in the state.

Divulging the details, Fisheries Minister Laljit Singh Bhullar said, farmers are getting an income of Rs.3.00 lakh per acre by adopting shrimp farming, adding that shrimp farming is being practised on the saline affected water logged land, which has proved a boon to supplement the income of the farmers.

“With the strenuous efforts of the Fisheries Department, as far as 1200 acre area has been brought under shrimp culture during the last year” said the Cabinet Minister, adding that Mann government has planned to expand shrimp farming in 5,000 acres during next five years in order to increase the income of farmers.

Mr. Bhullar informed that for the development of shrimp culture, a dedicated Demonstration Farm-cum-Training Center is being run at Village Ena Khera in district Sri Muktsar Sahib, where free training and soil-water testing facilities are being provided to shrimp farmers.

He said that special emphasis is being laid to develop infrastructure for fish farming and increase fish production in the state. State government is supplying good quality fish seed to farmers at subsidized rates from government fish seed farms. The construction work of new government fish seed farm is underway at Village Killianwali, District Fazilka, which will soon be completed and dedicated to the people.

Apart from this, Fisheries Department is providing financial assistance for adopting aqua culture, purchasing transport vehicles such as bicycle, motorcycle, auto-rickshaw, insulated and refrigerated vehicle for the transportation of fish. Advanced techniques of fish farming like Re-Circulatory Aquaculture System (RAS) and Bio-floc Technology is also being promoted under this scheme.