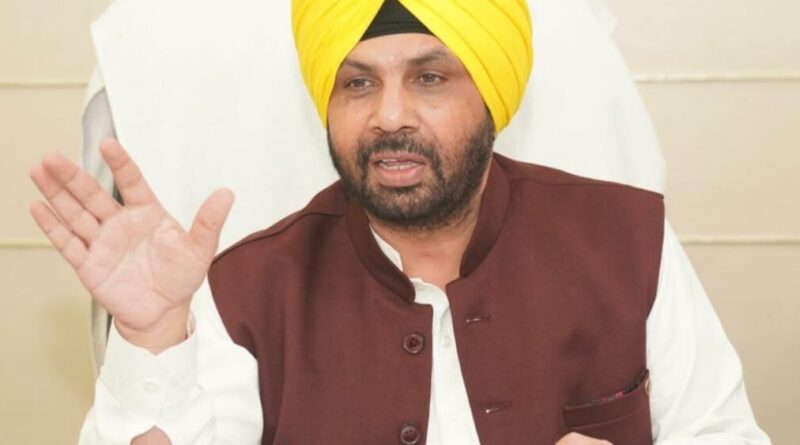 Punjab News : The Punjab Government under the vibrant leadership of Chief Minister Bhagwant Mann has fulfilled the pre poll promise of providing free power to every household. Disclosing this here today Punjab Power Minister Harbhajan Singh ETO said that the earlier governments used to betray people with fake promises to garner votes but the Bhagwant Mann led government has fulfilled the promise of Zero electricity bill in the very first year of their tenure.

The Power Minister said that free 600 units of electricity bimonthly/300 units of electricity monthly has been granted for all domestic consumers, with annual subsidy benefit of Rs. 5,629/- Cr. along with continuation of subsidy of Rs. 3 per unit upto7 KW for Domestic Consumers with annual benefit of Rs. 1,278 Cr. The Power Minister said that with this about 90% households are now getting “ZERO” bills which is expected to increase in January, 2023.

Harbhajan Singh ETO said that besides providing free Power to all residential units, all pending bills up to 31st December, 2021 have been waived off. All such disconnected connections have been restored’, said ETO.

The Power Minister said that their previous governments lured the farmers with the free power to farmers for tubewells but the farmers were never given uninterrupted power supply due to which they had to face lot of problems for irrigation. He said that the Chief Minister Bhagwant Mann led government has not just continued free power to Agricultural consumers but for the first time ensured eight hours regular power supply during the paddy season without any power cut.
In another incentive for the farmers the Punjab Government has reduced the Tube-wells load enhancement fees from Rs. 4750/BHP to Rs. 2500/BHP which resulted in benefitting 1,87,000 farmers.

Harbhajan Singh ETO said that with the concerted efforts of State Government the Pachhwara Coal Mine has been operationlised by settling long pending litigations, Forest, Clearance, Environment Clearance, Ground Water clearance, Mining Lease , Consent to Establish, Consent To Operate, Mine Opening Permission and railway Transport Clearances. Pachhwara Coal Mine having Mining capacity of 7 Million Tonnes Per Annum (MTPA) was allotted by MoC/GoI to PSPCL on 31.03.2015 and was not in operation for the last 7 years. The Punjab Power Minister said that with the operationalization of Pachhwara Coal mine about Rs 500 Cr. would be saved annually.
After a gap of eight years, a freight train carrying coal from Pachhwara Central coal mine in Jharkhand reached Ropar Thermal Plant on December 16, 2022 where it was received by Chief Minister Bhagwant Mann who termed it as a giant leap towards making Punjab power surplus.