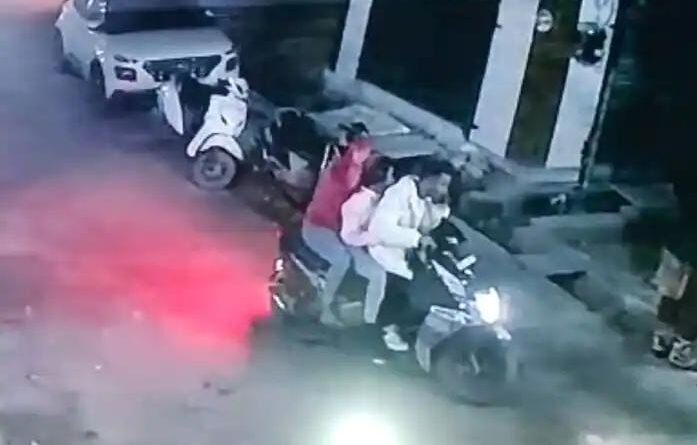 New Delhi: Two new CCTV footages have emerged in the Kanjhawala case. The CCTV footage of from December 31 shows that Anjali is seen with her friend Nidhi and a boy is also seen with them. Now the big question arises that who is the boy seen in the CCTV with Anjali and Nidhi?

On the night of December 31 and January 1, there was a horrific Kanjhawala incident in which Anjali was dragged out of the car and killed. There are two new CCTV footages from the same time has surfaced. The first CCTV footage is from 7.07 pm on the night of December 31. In this CCTV footage, three people come on a scooty, including Nidhi, Anjali and a boy with them, who is driving the scooty.
Anjali is sitting in the middle on the scooty and Nidhi is at the back. The scooty stops in front of the street, after which Nidhi hands something in Anjali’s hand and goes inside. But Anjali stands there and talks to the boy. After this, Anjali also runs inside the street. At the same time, the boy also goes away with a scooty. The CCTV footage is said to be near Anjali’s house.
Just three minutes later, in the footage, Anjali comes out of the street. Nidhi also comes out behind him. After this, Anjali goes there riding on a scooty already standing there. Nidhi also sits behind the scooty and leaves. This is the same street where the boy left both of them just three minutes ago.