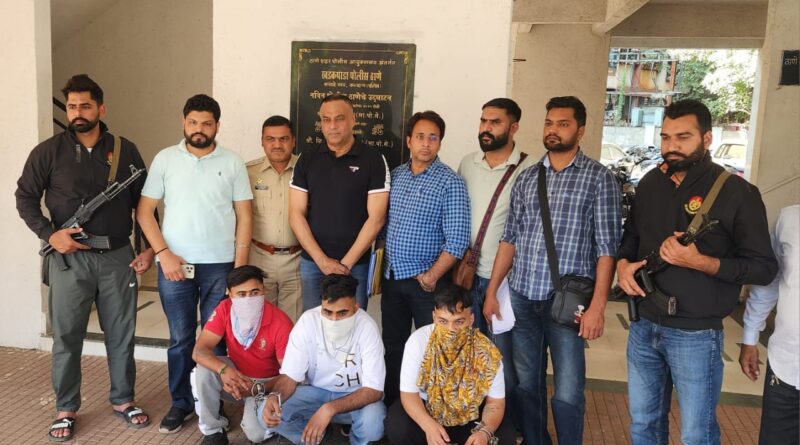 www.punjabenews.com: The ongoing drive against anti-social elements launched on the directions of Chief Minister Bhagwant Mann achieved a major breakthrough after Anti Gangster Task Force (AGTF) of Punjab Police in a joint operation with central agencies and Maharashtra Anti-Terrorism Squad (ATS) on Monday arrested three key operatives of Gangster Rajesh Kumar alias Sonu Khatri for their direct involvement in Makhan Kang Murder Case, which took place in Nawanshahr in March 2022. The trio was arrested from Ambilvali in district Thane in Maharashtra.

Director General of Police (DGP) Punjab Gaurav Yadav identified the arrested accused persons as Amandeep Kumar alias Rancho, Shivam alias Avtar alias Tara and Gurmukh Singh alias Gora, all resident of SBS Nagar. All the accused persons have a criminal history with a number of criminal cases pertaining to murder, attempt to murder, extortion, carjacking and under NDPS Act registered against them, he added.

“The teams of Punjab Police’s AGTF in a well-coordinated operation with central agencies and ATS Maharashtra have arrested the trio accused persons from a hide-out at Om Sai Apartments in Thane of Maharashtra arranged by the Gangster Sonu Khatri,” he said.

The DGP said that with the arrest of these three key operatives of Gangster Sonu Khatri, the Punjab Police have got vital clues about the remaining absconding accused persons in the Makhan murder case.

He said that further interrogation of the arrested persons is expected to unveil the future criminal activities planned by Gangster Sonu Khatri.

Meanwhile, Punjab Police have procured four days of transit remand of the arrested accused persons after producing them at the local Court in Maharashtra.