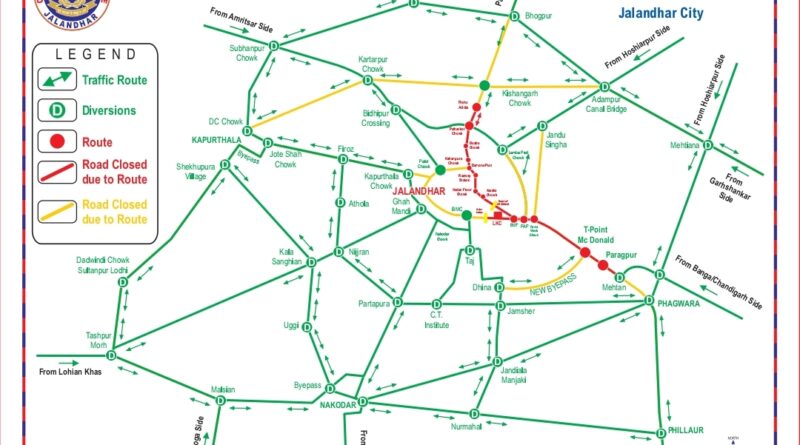 Jalandhar: In view of the ‘Bharat Jodo Yatra’ being held in Jalandhar district on January 14, the Commissionerate and District Police (Rural) while giving details of alternative routes for transportation on the route of the yatra appealed to the people to adopt the routes issued by the police on January 14 and 15 so that they do not face any inconvenience.

According to the alternative traffic arrangements issued by the Rural Police, on January 14, traffic from Jalandhar-Phagwara to Ludhiana will go from Konika Resort to Ludhiana via bypass Banga, Nawanshahr and Rah. Similarly, traffic coming from Ludhiana to Jalandhar will reach Jalandhar via Ludhiana via Sidhwan Bet, Mehatpur, Nakodar. Similarly, small vehicles (one-way) going from Jalandhar-Phagwara to Ludhiana will go from Konika Resort to Gurayan, Phillaur and Ludhiana.
According to the alternative routes of traffic issued by the Commissionerate Police, on January 15, the traffic going from Ludhiana-Phagwara to Hoshiarpur will reach Hoshiarpur via Phagwara to Mehtiana. Traffic from Ludhiana-Phagwara to Amritsar will reach Mehtiana from Phagwara, Adampur, Bhogpur to Tanda, Sri Hargobindpur to Amritsar. Heavy traffic coming from Ludhiana to Jalandhar, Kapurthala will reach Jalandhar, Kapurthala via Phillaur via Nakodar.
Similarly, traffic coming from Ludhiana-Phagwara to Jalandhar and Kapurthala will pass through Satnampura from Phagwara Sugar Mill Chowk and reach Jalandhar from Jandiala to Jamsher via 66 feet road.
Traffic from Jalandhar to Phagwara will reach Phagwara via 66 feet road Jalandhar to Jamsher, Jandiala to Satnampura. Similarly, traffic coming from Hoshiarpur to Jalandhar will reach Jalandhar via Workshop Chowk from Adampur to Jandusingha, Lamma Village Chowk to Y Point Bhagat Singh Colony-Maqsudan Chowk via Workshop Chowk.
Traffic from Jalandhar to Pathankot will reach Kartarpur, Beas, Batala from Gurdaspur to Pathankot from Pathankot Chowk flyover.
The Commissionerate Police has appealed to the people to adopt only diverted routes from 7 am on January 15 till the end of the yatra. For more information/assistance regarding alternative routes of traffic, traffic police helpline numbers 0181-2227296 and 98763-00923 can be contacted.