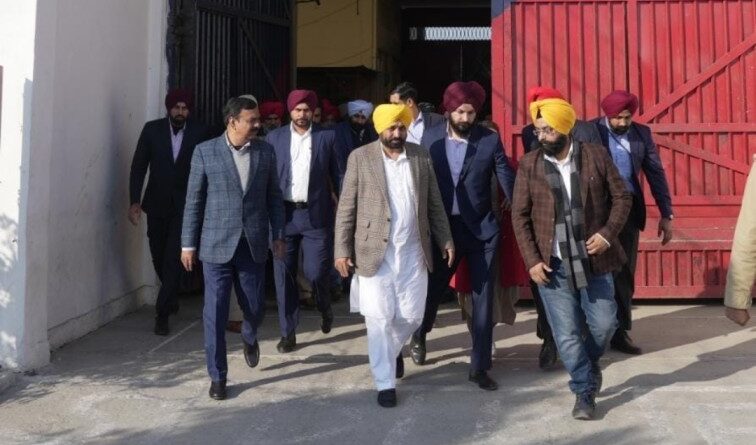 PunjabENews:  Punjab Chief Minister Bhagwant Mann on Monday said that the state government is preparing a comprehensive blueprint for beefing up the security in jails on scientific lines.

The Chief Minister, who inspected the district Jail here today, said that the state government has already installed high powered Jammers, door metal detectors and other equipment besides providing vehicles for the department to update the security system in the jails. However, he said that to ensure a foolproof security system strenuous efforts are afoot. Bhagwant Mann said that based on requests of the jail authorities more CCTV cameras along with hi-end techniques will be installed in the jails to further beef up security in jails.

Underlining the need to strictly check the supply of drugs and mobiles in the jails, the Chief Minister also directed the officers to take every step to curb this illegal practice. He said that security of the Jails was the prime concern of the state government and no compromise can be made in this regard. Bhagwant Mann also called upon the jail inmates to join the mainstream by shunning away their shady past.

The Chief Minister, while expressing concern over the reports of lack of health facilities to jail inmates, said that the state government is committed to overcome this problem. He said that soon that medical staff will be permanently stationed permanently in the Jails to impart treatment to inmates in case of emergency. Likewise, he said that new ambulances will also be deployed in the jails so that it can be utilized whenever there is any such need.

The Chief Minister also addressed the jail inmates via Radio Ujala, set up for their entertainment. He said that the Punjab government has sought reports from all jails about the jail inmates who are not having financial support to deposit the bonds, so that they can be helped for joining the mainstream. Bhagwant Mann also said that the new Video conference rooms are being set up in jails for virtual hearing, so that court proceedings are put on fast track.

On the occasion, the Chief Minister also visited the Jail hospital, Laboratory, wards, emergency and others.