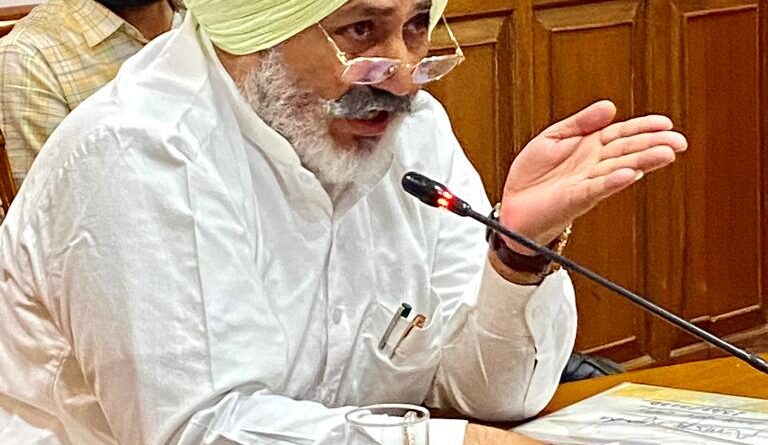 Chandigarh: The Bhagwant Mann led Punjab government has revamped the image of the state’s government health sector in just nine months of its running tenure. Improving government health infrastructure and services to the general public were top priorities of the Aam Aadmi Party (AAP) government and health related promises which were made in the poll manifesto were fulfilled by the party soon after its massive success.

More than 100 Aam Aadmi Clinics (AAC) popularly known as Mohalla clinics were inaugurated in rural and urban areas of Punjab and it has happened for the very first time in the history of Punjab since independence that any political party has put impressive stress on health services across the state. It is expected that around 500 more such clinics will be in service on January 26.

The state health and family welfare minister, Mr. Chetan Singh Jauramajra said “Bringing revolutionary change in the health sector is the apex aim of this government and we are giving our selfless effort for its improvement””. He expressed that “People are taking advantage of AACs and it is clearly seen in statistics of AAC that within first three months 630035 patients were treated and 81909 lab tests were conducted in the laboratories of AACs respectively”. The health minister added “Punjab Health Systems Corporation has supplied medicines and consumables worth 124 crore rupees to the AAC and other health institutions in Punjab”.
He said “Even union government is well aware of our efforts and it is the only reason that our efforts in the health sector were felicitated on many occasions”. Punjab has been successful in reducing Maternal Mortality by 13.93 percent as 34 dedicated Mother and Child hospitals have been operationalised in the state.
Mr Jauramajra said that “The government has put special attention over the spread of Hepatitis B and C and we put more stress upon screening of patients and their timely treatment”. He said “The attention by the previous state government against hepatitis was very poor as screening and treatment was less but our government has screened more than 3 lakh suspects and 247680 pregnant women were tested free of cost for hepatitis B and C.”

Mr Jauramajra asserted that “The government is running Rashtriya Bal Swastha Karyakram (RBSK) in a more efficient manner and provided free treatment to 22585 children of government schools and aanganwari centers across the state”. He said “We have conducted free heart surgeries of 224 children in prestigious government and private empanelled health facilities.’ ‘, added he.

He informed that “The government has also inaugurated a 300 bedded cancer hospital at Mullanpur near Chandigarh and provided free treatment of worth 16.25 crore to 1555 cancer patients in the state”. Sharing another milestone, Mr Jauramajra said “The problem of cataract has become common ailment in Punjab but we are committed to eliminate it, 126010 surgeries of cataract patients were done and the sight of 512 patients have made possible through keratoplasty surgery”, He said “We are running National Programme Against Cataract and Blindness efficiently”.

Mr Jauramajra said “We have provided medicines to de-addiction centres worth Rs 58 crore rupees”. He said “The start of 21 CT scan and 6 MRI scan centres were also another achievement of the Punjab government in its running tenure”.
Dedicated 24*7 Stroke ready units have also been operationalised recently to cater to brain stroke patients in all 23 district hospitals and three medical colleges , where a patient with brain stroke will get prompt treatment and such a patient will be provided free CT scan and a life saving injection worth 30000 rupees free of cost.

Mr Jauramajra said “We have also rejuvenated the mass media wing of the health department”. He said “Mass media wing officials including District Mass Media Officer, Deputy Mass Media Officer and Block Extension Educators have asked to create awareness at grass root level so that we could educate the masses about preventive measures against various diseases”. Mr Jauramajra said “We will provide updated equipment to the wing so that they could start a wave of awareness across the state”.