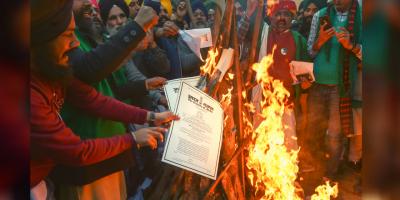 Amritsar: Amidst the ongoing sit-in by the farmers for their rightful demands and inclement weather, the struggling Lohri was celebrated. Lohri was celebrated by farmers at 18 toll plazas and dharnas outside 10 deputy commissioner’s offices across the state today. While the entire country is celebrating the festival of Lohri, the farmers celebrated Lohri during the 48th consecutive day of the sit-in in front of the Deputy Commissioner’s office in Amritsar.